US doctors say trampolines are a danger to kids

US doctors say children should be discouraged from using trampolines because they are a health hazard.

The American Academy of Pediatrics (AAP) estimates that almost 98,000 people are injured each year in the US on trampolines and many of these are children.

UK safety experts say the sport is growing in popularity here and related injuries are on the rise.

But they say trampolining can be a healthy way to exercise and good fun. 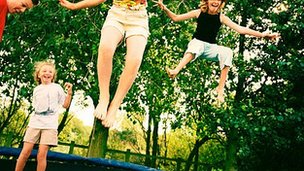 The renewed advice from the AAP says paediatricians need to “actively discourage” recreational trampoline use.

Dr Michele LaBotz, who co-authored the AAP report said: “Families need to know that many injuries occur on the mat itself, and current data do not appear to demonstrate that netting or padding significantly decrease the risk of injury.”

The researchers found that most injuries occur when more than one person is on a trampoline.

Children under five are more likely to suffer serious injury, with 48% of injuries in this group resulting in fractures and dislocations.

Some injuries may even be fatal – failed attempts at somersaults and flips frequently cause cervical spine injuries, resulting in permanent and devastating consequences, says the AAP.

But the UK’s Royal Society for the Prevention of Accidents (Rospa) says trampolining can be enjoyed safely if a few simple rules are followed.

For example, put the trampoline on a softer surface like the lawn rather than concrete and consider using safety netting.

“But a safety net is not a substitute for adult supervision,” a spokesman added.

More than half of all trampoline accidents occur while children are being watched by an adult, but using trained supervisors can greatly reduce this risk, says Rospa.

Latest UK figures show that, in 2002, 11,500 people in the UK ended up in hospital after a trampoline accident – an increase of more than 50% in five years.